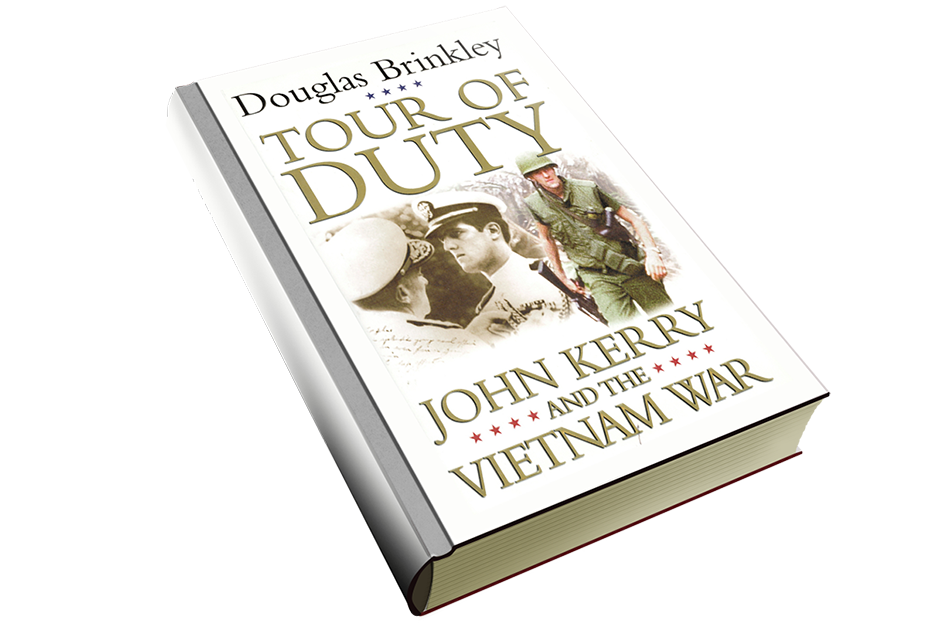 Covering more than four decades, this is the first full-scale, definitive account of Kerry’s Journey from war to peace. Brinkley has drawn on extensive interviews with virtually everyone who knew Kerry in Vietnam. Kerry also relegated to Brinkley his letters home from Vietnam, voluminous “war notes” journals and personal reminiscences written during and shortly after the war. This material was provided without restriction, to be used at Brinkley’s discretion, and has never before been published.

Throughout, Brinkley deftly deals with issues such as U.S. atrocities in Vietnam and the bombing of Cambodia. Using information from the newly released Nixon tapes, Brinkley reveals how White house aides Charles Colson and H.R. Haldeman tried to discredit Kerry. Refusing to be intimidated, Kerry ran for public office, eventually becoming a senator from Massachusetts. But he never forgot his fallen comrades returning to Vietnam numerous times to look for MIAs and POWs. When president Clinton officially recognized Vietnam in 1995, at long last Kerry’s thirty-year-long tour of duty ended.

Covering more than four decades, Tour of Duty is the definitive account of John Kerry’s journey from war to peace. Written by acclaimed historian Douglas Brinkley, this is the first full-scale, intimate account of Kerry’s naval career. In writing this riveting narrative, Brinkley has drawn on extensive interviews with virtually everyone who knew Kerry well in Vietnam, including all the men still living who served under him. Kerry also entrusted to Brinkley his letters home from Vietnam and his voluminous “War Notes” — journals, notebooks, and personal reminiscences written during and shortly after the war. This material was provided without restriction, to be used at Brinkley’s discretion, and has never before been published.

John Kerry enlisted in the Navy in February 1966, months before he graduated from Yale. In December 1967 Ensign Kerry was assigned to the frigate U.S.S. Gridley; after five months of service in the Pacific, with a brief stop in Vietnam, he returned to the United States and underwent training to command a Swift boat, a small craft deployed in Vietnam’s rivers. In June 1968 Kerry was promoted to lieutenant (junior grade), and by the end of that year he was back in Vietnam, where he commanded, over time, two Swift boats. Throughout Tour of Duty Brinkley deftly deals with such explosive issues as U.S. atrocities in Vietnam and the bombing of Cambodia. In a series of unforgettable combat-action sequences, he recounts how Kerry won the Purple Heart three times for wounds suffered in action and was awarded the Bronze Star and the Navy’s Silver Star for gallantry in action.

When Kerry returned from Southeast Asia, he joined the Vietnam Veterans Against the War (VVAW), becoming a prominent antiwar spokesperson. He challenged the Nixon administration on Capitol Hill with the antiwar movementcheering him on. As Kerry’s public popularity soared in April-May 1971, the FBI considered him a subversive. Brinkley — using new information acquired from the recently released Nixon tapes — reveals how White House aides Charles Colson and H. R. Haldeman tried to discredit Kerry. Refusing to be intimidated, Kerry started running for public office, eventually becoming a U.S. senator from Massachusetts. But he never forgot his fallen comrades. Working with his friend Senator John McCain, he returned to Vietnam numerous times looking for MIAs and POWs. By the time Bill Clinton was elected president in 1992, Kerry was the leading proponent of “normalization” of relations with Vietnam. When President Clinton officially recognized Vietnam in 1995, Kerry’s three-decade-long tour of duty had at long last ended.

Praise for Tour of Duty: John Kerry and the Vietnam War

“A masterful job showing how war, with its unique mix of sacrifice and malice, courage and trepidation, both burdens and strengthens the heart of the combatant, who learns in equal measure how cruel and how noble human beings can be.” — John McCain

“Stunning…the excerpts from Kerry’s letters and diaries are as moving, candid, and powerful as the best Vietnam War writing.” — Joe Klein, Time

“Doug Brinkley succeeds in humanizing John Kerry, something the senator often has trouble doing himself. Tour of Duty is an incisive look at a man who would be president.” — Bill O’Reilly, Fox

“Kerry deserves credit for allowing it to be published…but like other Americans who saw combat — men like Ambrose Bierce, Ernest Hemingway and Joseph Heller — he has added his voice to the…literature of men at war.” — Peter Carlson, Washington Post

“[Includes] interviews with Kerry and surviving crew mates. Brinkley…depicts war in riveting detail….gripping reading…The most insightful examination available of the character of this or any other Democratic candidate.” — Publishers Weekly (Starred review)

“Tour of Duty richly details how wrenchingly transformative an effect the Vietnam War had on the man who could become the next president…A serious book enriched by additional interviews with more than a hundred of Kerry’s shipmates, friends, and critics.” — David Garrow, Los Angeles Times

“John Kerry in Vietnam was a thrice-wounded man of action and a serious, critical thinker. The letters and journal he wrote at the time are the core of his haunting account of the U.S. Navy’s small boat campaign in the canals and narrow rivers of South Vietnam, a microcosm of the folly of the larger war. Douglas Brinkley’s interviews with survivors who fought alongside Kerry and his mastery of the vast literature on the war give the book added heft. For this reader the message is ‘lest we forget.'” — Gladdis Smith

“Tour of Duty is a fresh and welcome retelling…that Brinkley tenders in a lengthy, highly readable, and well-researched biographical history. Brinkley inserts many details to enhance the verisimilitude of his portrait of both the era and the man.” — Boston Globe

“Great material…The passages in Tour of Duty that describe Kerry’s personal and intellectual journey are the book’s most passionate…It convincingly shows us a man driven from an early age by a sense of destiny.” — New York Times

“Douglas Brinkley’s Tour of Duty reminds me of PT-109. This book is a vivid chronicle of the horrors of war and a young man’s extraordinary experience in coming to terms with it. The story of John Kerry’s journey from brave Swift boat commander in Vietnam to leading anti-war activist is a must-read. It captures the essence of a true profile in courage who changed America for the better, and who can do so again.” — Ted Kennedy

“Daily coverage will never provide the smooth, detailed portrait of the candidate as a young man offered in Tour of Duty by Douglas Brinkley. It’s a serious, sympathetic, extremely readable biography that appears now during Kerry’s campaign, but isn’t one of its props.” —Philadelphia Inquirer

“No one weaves narrative more deftly with analysis than Douglas Brinkley, and never has he had a more compelling and important tale to tell. The river was in Vietnam, the making of a hero, the education of a public man. Tour of Duty has it all. Splendid!” — H.W. Brands

“The experience of war does a great deal more than make men out of boys. “All wars, be they just and necessary or not, are epic calamities and their devastation and inhumanity will cause moments of doubt in the mind of the most ardent soldier and trouble all but the meanest conscience. In Tour of Duty, an account of my friend John Kerry’s experience and great courage in Vietnam, and his role in our national debate over that lost cause, Doug Brinkley does a masterful job of showing how war and its unique mix of sacrifice and malice, courage and trepidation, both burdens and strengthens the heart of the combatant who learns in equal measure how cruel and how noble humans beings can be. ” — John McCain

“A gripping story filled with both old-fashioned courage and post-modern despair. Historian Douglas Brinkley has perfectly captured the absurdity of the war that continues to haunt a generation. But it’s John Kerry’s raw heroism — both as a U.S Navy Swift Boat commander in the Mekong Delta/Ca Mau Peninsula and as an anti-war activist — that comes bursting through. Without question Tour of Duty —  a classic Vietnam War odyssey — is a tour de force.” — Bob Kerrey

“Brinkley’s invaluable contribution to the literature of the Vietnam War pay[s] tribute not only to one American hero but also to a generation.” — New Orleans Times-Picayune

“Although I have known John Kerry for many years and served with him in the United States Senate, this book opens up John Kerry’s gut like no other I’ve ever read. Here we see the inner conflicts — and inner triumphs — of ‘Johnny,’ the man inside of John Kerry. Quite frankly, this is the best biography of a soldier, politician and statesman under fire that I have ever read. It should inspire all of us Americans to give a ‘tour of duty’ for our country.” — Max Cleland

“Brinkley does his research well…an incredible, poignant..account of John Kerry before, during and after Vietnam….A portrait of a heroic young man at war, emerging from the chaos with a sense of equanimity, morality, and integrity.” — Globe and Mail

“Douglas Brinkley’s vivid rendition of brown-water operations in Tour of Duty rings true, with all the sights, the sounds, and the smells that made it such a unique experience. But this is far more than another war story. It is an account of a young man’s journey through his own ‘heart of darkness,’ ultimately emerging with his soul intact and his need to serve undiminished, ready to wage a different kind of war.” — Thomas Cutler, author of Brown Water, Black Berets

“Brinkley’s book is an intimate portrait of war. Douglas Brinkley is a distinguished historian, and he brings skills as a biographer and scholar on American foreign policy.” — Pittsburgh Post-Gazette

“A chilling story of the war years themselves – the lies and duplicity of politicians and generals, the brutality and cavalier cruelty, the indescribable courage. It is also a stark reminder of the volatile 1960s and early 1970s. There are some incredible insights into how political and military leaders can delude themselves into seeing things not as they are but as they wish them to be.” — Sacramento Bee

“Brinkley’s account of Kerry’s emergence as the leading war veteran against the war is well paced, insightful and compelling.” — Raleigh News and Observer

Excerpt from ‘Tour of Duty: John Kerry and the Vietnam War’

Chapter One: Up from Denver