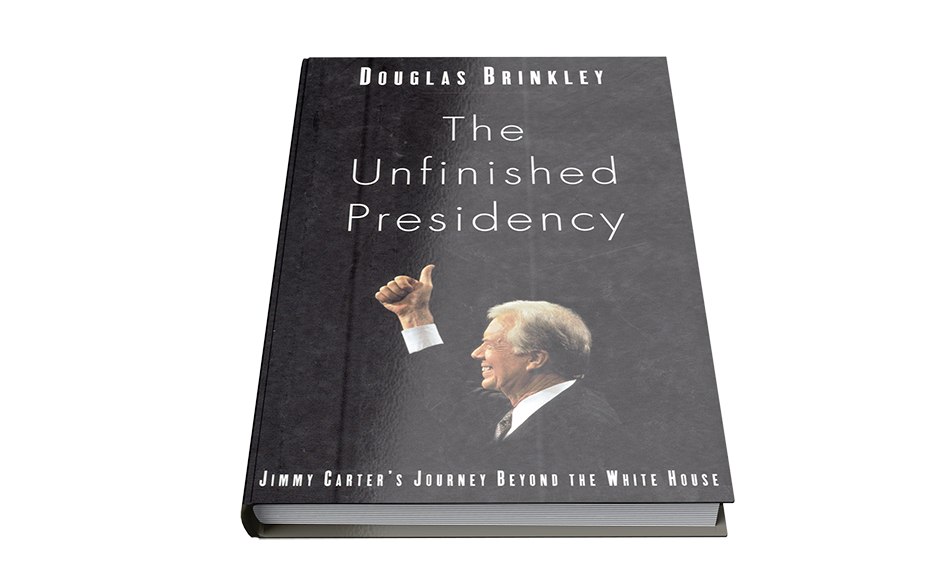 It is not a stretch to argue that history will remember Jimmy Carter for his post-presidential works long after his tenure in the White House has been forgotten. But as Douglas Brinkley points out in this absorbing study, it took such presidential accomplishments as human rights advocacy, the Camp David Accords, and the Panama Canal Treaties to give Carter the international moral credibility to refashion himself as the global peacemaker. Although his is an unauthorized biography, Brinkley has had unique and intimate access to the former President — traveling with him to meet Simon Peres in Israel and Jean-Bertrand Aristide in Haiti, spending hours interviewing him at home in Georgia, and being allowed exclusive access to the post-presidential papers, including Carter’s correspondence with fellow world leaders Mikhail Gorbachev, Deng Xiaoping, Margaret Thatcher, and Oscar Arias. Drawing on this wealth of information, Brinkley’s book fully captures the ubiquitous Carter’s prickly personality and remarkable political life since 1980, including the complex relationships he has developed with such international pariahs as Fidel Castro, Daniel Ortega, Hafez Assad, Kim Il Sung, and Yasir Arafat. In the end, Carter emerges as a formidable world statesman fueled by Christian zeal and a colossal ambition to make peace.

Jimmy Carter left the White House in January 1981, defeated in his bid for reelection and rejected by the American public — but hardly broken. In fact, as Douglas Brinkley’s absorbing book reveals, he attacked the next phase of his life more determined than ever, outside the scrutinized and politicized Oval Office, to complete a mission to pursue peace in embattled areas throughout the world, from Bosnia to Haiti. He has worked to ensure the safe transition to democracy in countries like Nicaragua and Panama, and has sought reconciliation between Palestinians and Jews. He has faced down the threat of nuclear arms in North Korea, led a successful campaign to eradicate two major life-threatening diseases, and been a tireless advocate for human rights and world health. And, of course, he has shown the world how to build low-income housing through his association with Habitat for Humanity.

Historian Douglas Brinkley has had unique and intimate access to the former president, as well as exclusive access to the post-presidential papers, including Carter’s correspondence with fellow world leaders Mikhail Gorbachev, Deng Xiaoping, Margaret Thatcher, and Oscar Arias. Brinkley’s book captures Carter’s prickly personality and remarkable political life, including the complex relationships he has developed with such international pariahs as Fidel Castro, Kim II Sung, Hafez al-Assad, and Yasir Arafat. He explores the sometimes difficult relationships Carter has had with the presidents who have succeeded him, and details his extraordinary partnership with Rosalynn, his fearless ally and confidante. He explores their deep and abiding faith, and how it affects their goals and strategies.

Brinkley also casts a new light on Carter’s underrated White House tenure, illustrating how it took such presidential accomplishments as the Camp David accords, the Panama Canal treaties, and his human rights advocacy to give him the international moral credibility to reinvent himself as a global peacemaker.

A remarkable work of meticulous scholarship from a prizewinning historian, The Unfinished Presidency will be the definitive portrait of this complicated, compassionate, driven man, a formidable world statesman fueled by Christian zeal and a colossal ambition to make peace.

Praise for The Unfinished Presidency:

“Carter has enjoyed a full share of other triumphs. Among them, surely, is the fortune of attracting Douglas Brinkley, a fairminded and thoroughly readable biographer. His account of ‘the ultimate antipolitician’ offers as full an answer available to the question, what’s Jimmy Carter been up to? Much, as it turns out.” — The Washington Post

“Douglas Brinkley, one of our most exciting historians, not only provides a richly textured narrative of Carter’s amazing post-presidency, he also uses the story to explore the relationship between realism and moral values in American foreign policy.” — Walter Isaacson, author of Kissinger

“The Unfinished Presidency is an unauthorized biography, not a hostile one… Until Carter authorizes a biography, this rigorously footnoted text gives a thoroughly sourced intimate portrait of one of the country’s most respected ex-presidents.” — USA Today

“This excellent study of Carter’s life and activities since 1980 is not an ‘authorized biography’ but is, withal, a very well-informed portrait of the ex-president.”— Foreign Affairs

“Jimmy Carter has given the role of ex-president new luster; and Douglas Brinkley’s excellent book records the possibilities and perils of an activist ex-presidency with candor, insight, and readability. A fine history!” — Arthur Schlesinger, Jr.

“This superb book shows how broad, sustained, and controversial were Carter’s efforts in Panama, Nicaragua, Haiti, the Middle East, the Gulf War, and Korea. Every chapter is filled with insight and revelation.” — Gaddis Smith, Larned Professor of History, Yale University

“It is widely agreed that Jimmy Carter is among the greatest if not the greatest of all ex-presidents in U.S. history…this thorough and authoritative work will be of keen interest to students of the presidency and foreign affairs.” — Library Journal

“Brinkley’s research into Carter’s personalized diplomacy is first rate (helped by special access to Carter’s papers); his prose is insightful about the religious convictions underlying Carter’s tenacious will to find peace wherever parties to a conflict seem stymied and intransigent.”  — Booklist

“With its astonishing detail and subtle insights, it is hard to imagine that this definitive account will ever be surpassed.” — Peter G. Bourne, author of Jimmy Carter: A Comprehensive Biography from Plains to Post-presidency

“The Unfinished Presidency should help redeem the man whom both Republicans and Democrats for two decades have kicked around like a political football….[it] should be given to Clinton as a going-away present to inspire him as he begins his post-presidential odyssey in 2001.”  — Commercial Appeal

“Jimmy Carter is the most active and influential former president since Teddy Roosevelt. He has earned everyone’s admiration and become a model of how to not just carry on but to contribute after leaving the White House. Doug Brinkley, the best of the new generation of American historians, tells us in vigorous language the story of Carter’s quite amazing range of activities, at home and around the world. As a bonus, Brinkley’s The Unfinished Presidency offers marvelous portraits of a wide range of world leaders, as seen from the unique perspective of Jimmy Carter. Highly recommended!” — Stephen Ambrose, author of Undaunted Courage

“Fascinating. Brinkley’s book is an important history….and will be an invaluable resource…It will also ensure that Carter will be judged historically on his full political career.” — Los Angeles Times

“Douglas Brinkley has told the story of Jimmy Carter’s second and subsequent comings with critical sympathy and a wealth of research…[Brinkley] is excellent…at bringing to life the elusive personality, sweet yet angular, of Jimmy Carter himself. Even Carter’s severest critics….will find it hard to be unmoved by his blend of idealism and practicality.” — The New York Times Book Review

“The Unfinished Presidency shows that, in a world of corruption and evil, a man of ideals can make a difference.” — The Atlanta Journal-Constitution