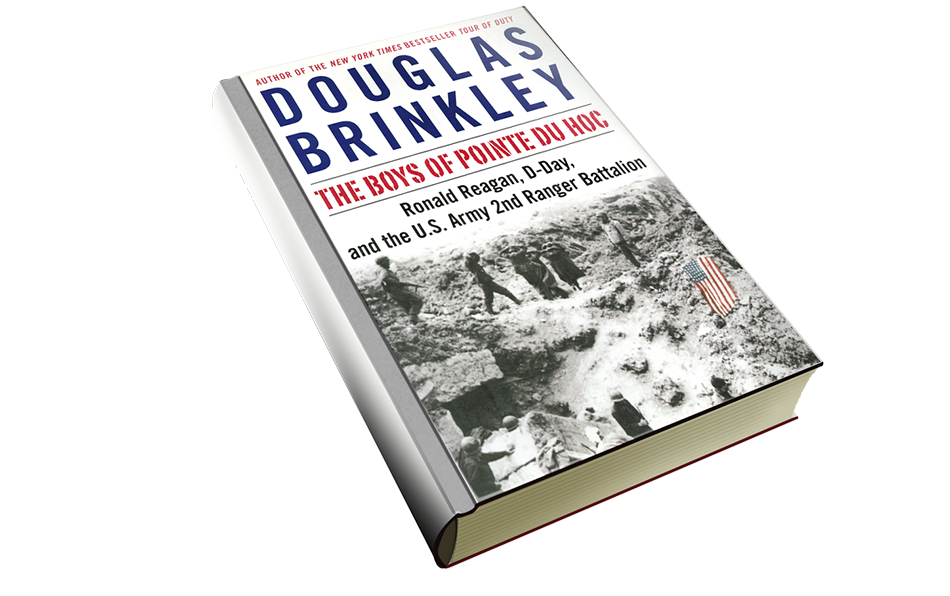 The 100-foot promontory known as Pointe du Hoc — where six big German guns were ensconced — was the number one target of the heavy U.S. and British warships poised in the English Channel on D-Day morning. Facing arguably the toughest task to befall U.S. forces during the war, the brave men of the Army 2nd Ranger Battalion boldly took control of the fortified cliff and set in motion the liberation of Europe.

Based upon recently released documents, here is the first in-depth, anecdotal remembrance of these fearless Army Rangers. Acclaimed author and historian Douglas Brinkley deftly moves between events four decades apart to tell two riveting stories: the making of Ronald Reagan’s historic 1984 speeches about the storming of the Normandy coast and the actual heroic event that inspired them and helped to end the Second World War.

Acclaimed historian and author of the New York Times bestselling Tour of Duty Douglas Brinkley tells the riveting account of the brave U.S. Army Rangers who stormed the coast of Normandy on D-Day and the President, forty years later, who paid them homage.

The importance of Pointe du Hoc to Allied planners like General Dwight Eisenhower cannot be overstated. The heavy U.S. and British warships poised in the English Channel had eighteen targets on their bombardment list for the D-Day morning. The 100-foot promontory known as Pointe du Hoc — where six big German guns were ensconced — was number one. General Omar Bradley, in fact, called knocking out the Nazi defenses at the Pointe the toughest of any task assigned on June 6, 1944. Under the bulldog command of Colonel James E. Rudder of Texas, who is profiled here, these elite forces — “Rudder’s Rangers” — took control of the fortified cliff. The liberation of Europe was under way.

Based upon recently released documents from the Ronald Reagan Presidential Library, the Eisenhower Center, Texas A & M University, and the U.S. Army Military History Institute, The Boys of Pointe du Hoc is the first in-depth , anecdotal remembrance of these fearless Army Rangers. With brilliant deftness, Brinkley moves between two events four decades apart to tell the dual story of the making of Reagan’s two uplifting 1984 speeches, considered by many to be among the best orations the Great Communicator ever gave, and the actual heroic event, which was indelibly captured as well in the opening scenes of Steven Spielberg’s Saving Private Ryan.

Praise for The Boys of Pointe du Hoc:

“The boys of Pointe du Hoc are needed today. Douglas Brinkley’s fine historical exposition weaves the courage of the American Rangers at D-Day into the fabric of the Reagan presidency to illuminate just what qualities are needed now to keep the United States strong and free.  An important and entertaining book.”

“In The Boys of Pointe du Hoc, historian Douglas Brinkley proves again his instinct for our strongest history, his ear for the music — as well as lyric — of our proudest World War II moment. Brinkley knows there is sometimes a theater to war and always to its remembrance. More than a grateful taps for those who gave so much on those cliffs of Normandy, his book is a bugle call of reveille for what they did.”

— Chris Matthews, host of Hardball and author of Kennedy and Nixon

“In this jewel of a book, Douglas Brinkley proves his skills as a master storyteller. With solid research and superb writing, he weaves together two dramatic events. The memorable battle of Pointe du Hoc is re-created in vivid detail, as is the story of the moving commemorative speech Ronald Reagan delivers at the site that helped launch a renewed appreciation of World War II veterans. Brinkley’s idea of linking these two events yields a fascinating and original book.”

“Doug Brinkley does a glorious job weaving together the story of Ronald Reagan’s visit to Normandy and the U.S. Army Rangers who fought on D-Day. The result is a powerful tale that celebrates…the patriotism and pride inspired by America’s brave soldiers.”

“In this fascinating new study, Douglas Brinkley tells the inside story of Reagan’s Normandy speeches with insight and great eye for detail, shedding fresh light on the making of a crucial presidential moment.”

“Brinkley has not one, but two powerful stories to tell, and he makes the most of each — a gripping, you-are-there account of the Rangers who scaled Pointe du Hoc and a bold, even brilliant treatment of Reaganesque stagecraft.”

“Brinkley combines analysis of Reagan’s Normandy speech with a retelling of the Rangers’ deed and the reasons that nations are obliged to laud their war heroes. both the novice and D-Day historians will want to read The Boys of Pointe du Hoc.”

— JoAnna McDonald, author of The Liberation of Pointe du Hoc

“Brinkley clearly and movingly tells the story of how a simple tribute became a milestone in the historiography of WWII and another feather in the great communicator’s cap.”  — Publishers Weekly

“Brinkley, a noted historian, does a marvelous job telling his multifaceted story. Enthusiastic and winsome in his presentation, he imparts his excitement to the listener.” — AudioFile

“An excellent read…A most useful and readable case study of the making of popular history.”